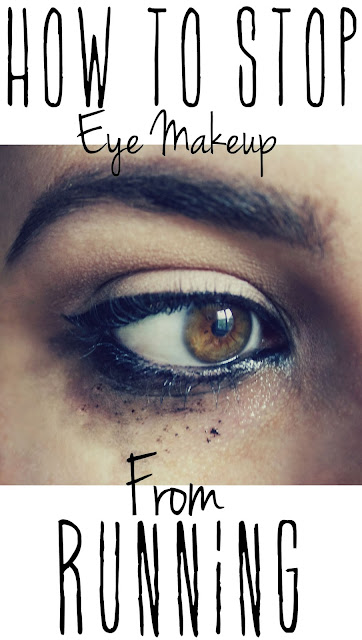 You know what sucks?  putting on makeup and ending up with smudgy raccoon eyes, that’s what.  But  I have good news…it’s pretty avoidable.

First: let’s get real. If you decide to wear eye makeup to a water-park or in the pool, or if you get splashed by a bus going through a giant puddle then you are just sh*t out of luck.  Most makeup will not stand up to extreme conditions, not even if it’s waterproof.  It will fair better than non-waterproof makeup, but you will still probably end up less than cute.

But on a regular normal day you can avoid the raccoon look pretty easily.  You just need to learn a few tricks. 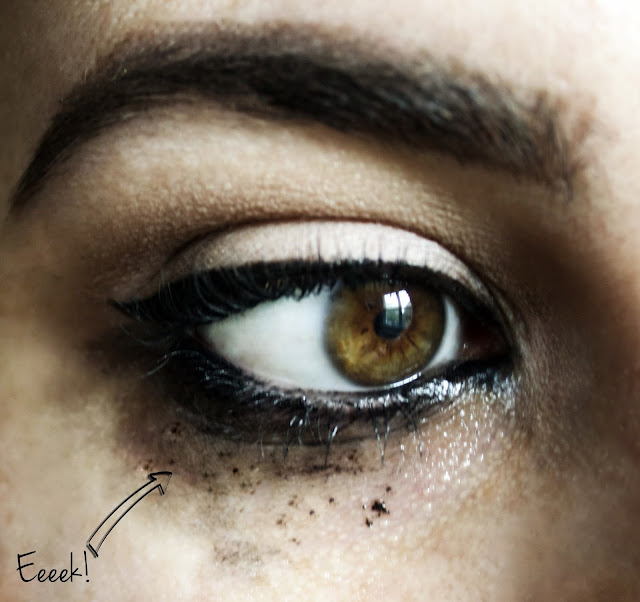 This doesn’t have to be you.

Eyeshadow Primer:  Ok we all know to put eyeshadow primer on our top lids to stop creasing and whatnot, but you can use it on your bottom lids as well.  If you run a little under your lower lash line it will stop your eyeliner and/or shadow from getting greasy and migrating south.

Even if you don’t put liner or shadow under the eyes, try putting some primer there anyway because it will also keep oils at bay and stop them from breaking down mascara on your bottom lashes, which is one of the worst culprits when it comes to the unintentional smudgy look.

Sometimes if I am wearing liner in my waterline I will even run a tiny bit of primer in there.  Now this trick WORKS, your liner will not move. But technically speaking most primers are not approved for use on the waterline, so do this at your own risk.  So far my eyes have yet to fall out of my head and I haven’t gone blind so I’m gonna keep doing it, but exercise caution.

Layering:  If you need help keeping liner on your waterline but you don’t want to experiment putting primer in there (especially if your eyes are sensitive) you can try putting your liner on and then using a similar color powder eyeshadow on a dense eyeliner brush to set it.   That will keep it in place much longer.

Long wearing waterproof liners are always a good choice, but even those need help in the waterline sometimes.  Just make sure the eyeshadow you layer over it isn’t glittery.  The glitter pieces can really irritate the eyeballs.

Obviously you can do this on your top lid as well…and actually this applies as a general makeup rule, thin layers always last longer than a single thick layer.

Bottom Lash Mascara:  The first thing most people will tell you if you complain that your bottom lash mascara runs is “try waterproof” and they aren’t really wrong.  If your bottom mascara is running because you’re crying or you’re locked out in the rain or something then waterproof is probably going to help a little.

For those who have the issue of an oily eye area though, waterproof isn’t gonna cut it.  Waterproof is not oil proof, so what happens is the oil in your skin breaks down the waterproof mascara and then it gets stuck to your face, and because it is in fact waterproof it’s a total b*tch to get off.

The answer for you oily folks is tubing mascara!  Tubing mascara is a weird little formulation that forms plastic-y tubes around your eyelashes.  They won’t smudge off from oily skin, and they can withstand a few tear drops as well so they really work well for the bottom lashes.  And when you want to take it off, you can just wash with warm water and they come off like little funny worm hairs and it’s kinda strange and fun.

By nature tubing mascara does not add volume, so I am not a fan of it for top eyelashes.  But for the bottom lash line that is actually awesome because it is virtually impossible to get them clumpy and spidery looking.  So you get natural but defined bottom eyelashes that won’t run.  Perfect!

As always you can try just one of these tricks, or all of these tricks combined and see what works best for you, and if you have any tricks that you love to stop your eye makeup from running, let me know in the comments!

Awesome!! I have been trying so many different mascaras with no luck. Thx!!

Oh, you’re very welcome! I think the blinc one will do the trick, for sure 😀

I am totally having this irratating problem. I have tried everything. Waterproof, Opthamologist tested, mascara primer, eye primer on the bottom lash line (which I always do anyway) a combination of waterproof & Opthamologist tested, smudge proof, smudge resistant, prestige brands, cheap brands, you name it I’ve tried it, trust me. NOTHING is working. I’ve tried tubing mascara, (one of them was actually very expensive) it litterally flakes into my eyes, it’s not all it’s cracked up to be in my opinion, I was not impressed. I don’t wear eyeliner on my lower lash line, I may use some shadow but never liner, my upper lash liner is always waterproof. The problem is I have long lashes and the tips touch my skin as I blink and such. I have even used a low heat setting on the hair dryer and ensured my lower lash mascara was completly dried, it didn’t help. I have also used translucent primer powder & even white finishing powder on them and that still didn’t help. I would skip them all together but they are not dark and the overall look it produces to skip them all together is not pretty. Oh and as if I couldn’t have any more hardships with this, my eyes are extremely sensitive & will water if anything gets in them & I mean anything, even wind. PLEASE HHHHHHHHHHHHEEEEEEEEEELLLLLLLPPPPPPPP ME

Well first I TOTALLY feel you on the watery eyes in the wind. I have that problem too and it’s SO annoying.

As far as the makeup smudging problem goes, if all else has failed I would say stick to using shadow on the lower lash line for some definition (very smart) For the lashes, have you tried Clinique bottom lash mascara? I don’t have any direct experience with it, but I have recently heard from several people (and the reviews seem to agree) that it’s a life saver for people who have trouble with their mascara smudging, and it’s not terribly expensive.

Also, have you ever considered getting them tinted? I have never done it but many salons do lash tinting and that may alleviate your need for mascara on the bottom. It wouldn’t make them fuller, but it would make them darker and help define the eye. There are DIY kits for this as well, but the thought of putting dye near your own eyes scares me so I would recommend seeing a reputable professional.

I don’t know if that will solve your problem, but hopefully it helps a bit!

Oh I’ve heard about tinting but had not associated that might work, very good idea!! And I’ve forgotten about bottom lash mascara, I need to check that out. Thanks so much!!

You’re welcome, hope it works out!

[…] lashes, it comes out clumpy no matter what you do, try a separate formula for the bottom!  I have mentioned before that tubing mascara is fantastic for the bottom lashes because it won’t smudge, but […]

[…] sister is and she assures me it’s a huge pain in the rump.  I’ve written before about how to keep your eye makeup in general from running, and it was a big hit so the struggle must be real.  But what about when it’s just your […]

I have no idea what tubing mascara is LOL HELP! 🙂

LOL it’s a type of formula that makes little plastic tubes around your lashes…sorta. It’s weird to explain hahaha. One example is the brand Blinc. I really like that one

It seems like no matter what I do, my bottom eyeliner continues to run. I’ve used primer, tried using the layering technique, and have tried many different kinds and brands of eyeliner. I’m totally at a loss and beginning to really get frustrated. It’s starting to feel like a lost cause. Please help!

Hmmm what type of makeup and/or skincare are you wearing on your face? I find that sometimes people who have oily skin or use a heavy moisturizer or a moisturizing base like a BB cream seem to have trouble with their eyeliner running even if they do everything else to stop it. Even if you have nothing else on your skin your natural oils may be causing your eyeliner to run.

Have you tried using a translucent setting powder on your under eye area? Something mattifying that is intended to set your makeup in place might help to soak up some natural oils and prevent them from creeping up and messing with your eyeliner. Even if you do not have any concealer or foundation on, the translucent powder on it’s own might still help. I use the Tarte Smoothe operator translucent powder, but for a drugstore option the Rimmel stay matte translucent powder is very good too. Hopefully that will help a little bit, good luck!

[…] pencil in Junkie on the waterline and the color it created was just…delish. Not to mention layering a powder over a pencil makes your waterline color last like a […]

Great advice but please HELP! I have long eyelashes, but still love to wear mascara,,,who doesn’t?! Because they are so long they constantly touch my skin and cause smudging and dots….I’ve tried numerous primers and various brands! I LOVE Yves St Laurent Mascara but they still smudge, even the waterproof one! Iv’e has my eyelashes tinted before and although they do look great it still isn’t quite the same! Any other tips you haven’t mentioned would be great! Xo

I do this everyday and it is the easiest simplest way to stop your makeup from smudging, I had the same problem with my eyeliner for years then I came across this tip and its saved my day (and my makeup), all I do after I finish my eyeliner and mascara is use a flat tip makeup brush to apply some foundation under my bottom lashline. There you have it, your smudging problem is solved!!

Hmm the only thing I can think of is to make sure you’re not over-curling them. If they’re too curly they definitely touch the lids more

Oh good one I’ll have to try that!

Really enjoyed this. Very informational blog. Every woman goes though the leaking mascara eyes. Especially when you cry!

Glad you enjoyed! Yeah we definitely all deal with it, leaky eyes are the worst 😉

Stopped by, by accident. Next time, it will be on purpose! LOVE your tips, but, also love the interaction you have with comments!

Aww thank you! thats so nice to hear! I’m so glad you find the tips helpful and I’m happy that you accidentally stopped by hahahaha <3<3<3

[…] when I wrote the first installation of this series, I had no idea that it would be one of my most read posts of all time.  That tells me that this is […]

My first time to this site… good stuff! I will totally try some of these tips – there is nothing worse than being at an event or a party, whatever, and thinking you are rocking it, when you get home and see that you’ve had smeared makeup under your eyes the whole time.
🙁 Oh the horror!!! heehee. No seriously it is horrible.

LOL getting home and discovering that in the mirror is an ACTUAL nightmare. Hahahaha hope some of the tips help!

I have a serious love-hate relationship with traveling.  I love being somewhere else, I hate the process of getting there,...
Copyright 2014 MsQuinnFace. All Rights Reserved. Sitemap Designed By: Ryan Lamothe
Back to top