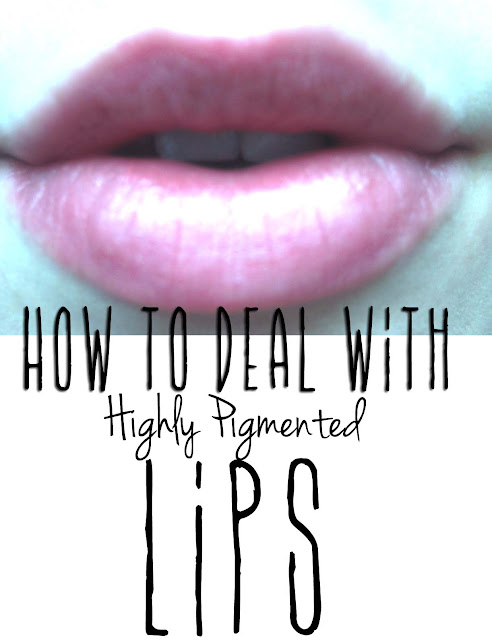 When I was a kid I went to a strict catholic school, with an even stricter “No Makeup” policy.  To the point where teachers would keep nail polish remover in their closets and if you were caught wearing polish they made you take it off right there in the classroom.  Looking back my interest in makeup might be completely built on spite . . .but I doubt it.  That love runs deeper than spite.
Walking through the halls I was often stopped, sometimes more than once a week, by nuns who were mad that I was wearing lipstick.  When I told them that it was just the color of my lips they would make me wipe them with a tissue because they thought I was a liar.  My littler sister went to the same school and went through the same thing…you would think they would have caught on that it was a genetic trait, but whatever.
Later in life when I was out of the nuns’ reach and I was old enough to know better, I began to really appreciate my pigmented lips.  Now that nobody was making me prove they were real, what’s not to like?  It’s like built in makeup.  All I have to do is put a balm on if I want to.
But alas genetic blessings often come with (minor) drawbacks, and if you are a makeup lover who has naturally pink lips, or you are a makeup artist who will eventually run into someone with them, you might want to learn to work around the natural coloring in order to get truer color out of sheer lip products.
Pigmented lips can make even a soft pink or peach gloss look almost like a bold lip look, which can be nice, but if you are looking for a specific color, it can get frustrating. 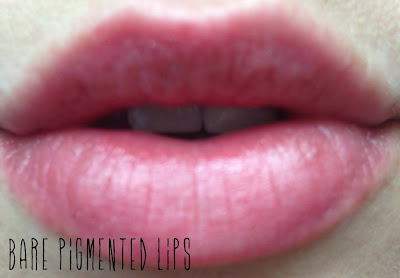 To give you an idea of what we are working with, here is what my lips look like with nothing on them. Pretty damn pink.  They get lighter sometimes if I don’t eat enough or if I’m sick or tired, but this is normally what I’m working with.
Some people have lips far more pigmented than mine, especially younger people.  When we were kids my sisters were literally scarlet red. 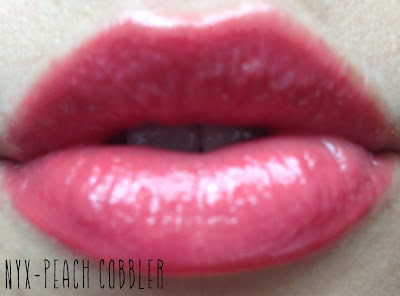 Here are my lips wearing  NYX Butter Gloss in Peach Cobbler.  Now I’m not saying this isn’t a nice color, but it isn’t what the gloss looked like when I saw it on the pretty sales girl at Ulta.  If you find yourself running into this issue and you want a more “true to color” look, you’re in luck because there is a really simple solution.
You need to find a matte or satin nude lipstick that is literally the same color as your skin.  Not the same as your lip skin like a “My Lips But Better” shade.  You need a shade that is the same as the skin on your face. 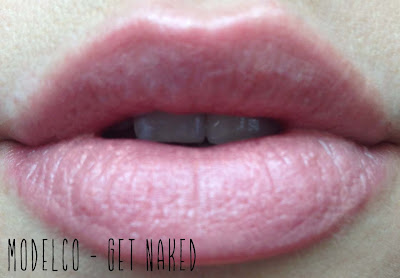 Modelco Party Proof Lipstick in “Get Naked” is pretty dead on for the color of my skin.  As you can see in the picture above when applied lightly it doesn’t completely blank out my lips, but it takes the pigmentation down quite a bit.  That’s all you need.  If you apply a bunch and blank out your lips completely it may start to get a little messy and goopy looking.  Not to mention I HATE the way heavily applied layers feel on my lips.  That’s personal preference I guess, but I find that a lot of people feel that way.
And since you chose a color similar to your skin, it will mimic the way your lips would look if they were naturally less pigmented.
Once you have that thin layer of nude lipstick on you can go ahead and apply your sheer or semi sheer lip color over it, as you normally would and the result should be much more “true to color” than it would be applied to the pigmented lips on their own. 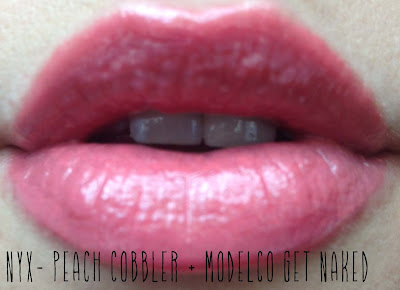 And because you didn’t put a ton of the lipstick on, it doesn’t look over done.  Compared to the version on the natural lips it is much more peachy, and looks a lot like the way it was on the girl at Ulta.

Here is a side by side.  Not insanely drastic, but it makes a difference.  You can also get a similar effect by applying concealer in a thin layer over the lips, but personally I am not a fan of how that sits on the skin.  It never really looks quite right to me.
That’s all you need to do to solve the problem make your lip products look more true to color.  Now get out there and find a nude lippy that will get the job done!

Nail Rehab - Getting Your Nails Back To Normal

Undertones: Cracking the Code and Finding the Right Foundation For You

[…] and test the water, see if you wanna go for a swim.  This color looks fairly pink on me, because I have really pigmented lips, but it’s much more peach of your lips are paler or more neutral.  Either way it’s a […]

I saw a video by Lisa Elridge ad she was doing a look inspired by a model with naturally berry stained lips which is like a dream. I didn’t think people can have such gorgeous lip color. So I’m here and loving your page :))) Can you show a picture of you or your sister with natural scarlett red lips? Wow it’s unbelievably awesome!!

Oh thank you so much! There are actually a bunch of pictures in this post here “Wowza Wednesday: Sister Edition” they aren’t quite as red as when we we’re kids but they still looks like she’s wearing lipstick pretty much all the time. 🙂

Thank you for your story as I am someone with bright red lips. I do like them but like others is like to tone them down sometimes. The nuns at my school didn’t comment on mine but older ladies did think I was wearing blush and lipstick when I was 5. I’m not alone=)

Embrace them girl! The older I get the more I appreciate waking up with some color in my face! <3<3

Nail Rehab - Getting Your Nails Back To Normal

A while ago I wrote a post about how to grow your nails and keep them healthy, and by following my own advice I manage...
Copyright 2014 MsQuinnFace. All Rights Reserved. Sitemap Designed By: Ryan Lamothe
Back to top