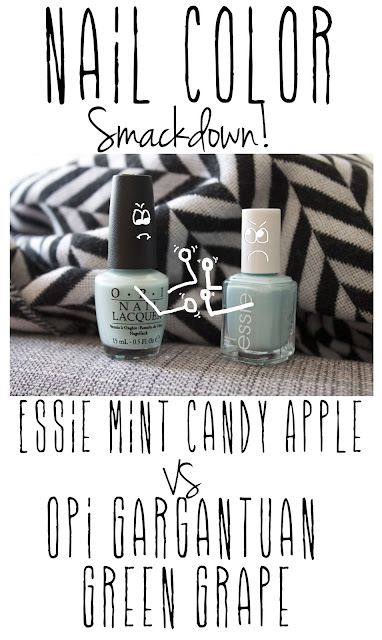 I have a terrible habit of going into a store and seeing something I really want, convincing myself I have something similar and then going home without it, only to sit around thinking about it and obsessing over it for a few days.  Then what happens? I make an entire separate trip back to the store to get it.
Thinking about it now I would probably save more money on gas and public transportation if I just bought what I want in the first place instead of going there twice, but thats another issue entirely.
So long story short last week I went to Ulta, saw OPI Gargantuan Green Grape and loved it, but convinced myself I didn’t need it because I already have Essie Mint Candy Apple, and it’s pretty similar.
Guess what I went back and bought yesterday…yup.
The time I spent trying to decide was littered with sporadic bouts of me sitting behind my computer looking for swatches that compare the two, and I was surprised to find that there weren’t all that many out there. So I figured I would do a little comparison for y’all who are sitting around toiling over this decision like I was. 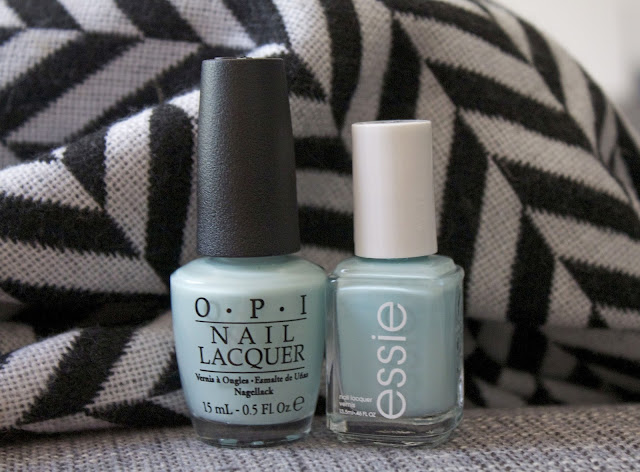 As you can see, in the bottles they look quite similar, but those with a keen eye for color will be able to tell that OPI Gargantuan Green Grape is a little more green and Essie Mint Candy Apple is a bit more blue. Also note they both have a cream finish without shimmer or glitter so, so far looking pretty much the same. 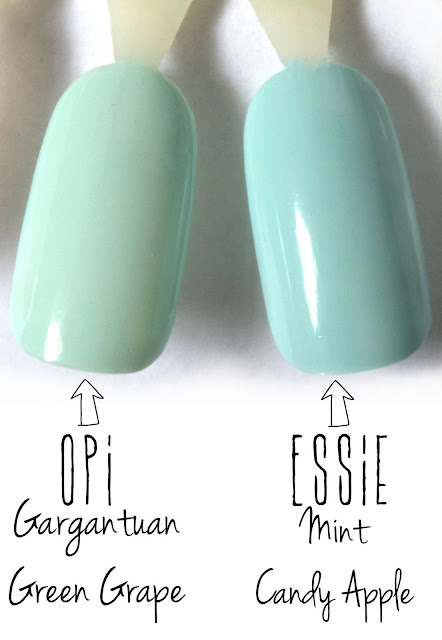 When swatched the color difference is more apparent.  As you can see Gargantuan Green Grape is much more of a true pastel green where Mint Candy Apple is a pastel blue-green.  It also became apparent when I swatched them that Gargantuan Green Grape is not as pigmented.  I needed three coats to make it opaque. Mint Candy Apple, which was opaque in two coats is definitely more creamy and thick.
So to me these are different enough that I don’t feel bad for buying both, but do keep in mind that I’m a little nuts and I REALLY love me some beauty products.  They are in fact still very similar, but in my color obsessed mind the greener color gives an entirely different feeling, and plays differently with skin tone and outfits than the more blueish Mint Candy Apple.
Basically, you don’t NEED both, but if you really want them both like I did I won’t judge you, I say just go for it.  This is the nail polish no judgement zone.
And for those of you looking for some mani inspiration, I think Gargantuan Green Grape looks pretty dope with some gold pyramid studs. 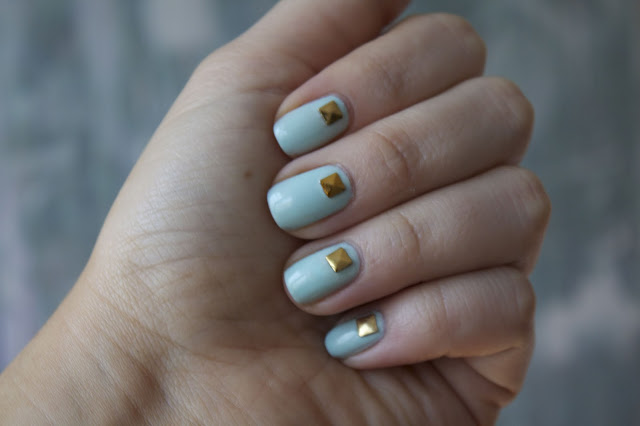 Somehow it almost gives me a retro vibe.
Hope this comparison helps if you’re like me and you just can’t decide whether to get one of them or not!

Too cute the pic of them fighting.
I have been on the hunt for the perfect mint for a long time now the best I have found is the sally hensen extreme wear its too light though
Mint candy apply is way blue for me
I will have to check out this opi one
The swatches online vary drastically lime to light blue … strange
Thanks!

Yeah I know what you mean about the perfect mint! I really like the opi one, but in some lights I think it’s still too blue. It looks really nice and minty in sunlight though. Let me know if you find the perfect one !