If you’ve been reading my blog for a while you know I love OCC Lip tars, so naturally when OCC released their newest formula, the Lip Tar Stained Gloss I snapped one up as soon as they went on sale on Sephora.com.
Literally as soon as they announced that they were available I ran to the computer like a maniac and ordered it and then did a little happy jig.
Having seen swatches from big bloggers who got them before they were released I figured that the color Meta would be most to my liking…I WANTED to buy all of them but hey, I’m on a budget so one will have to do.
So on to the nitty gritty.
The Packaging: The packaging is identical to the regular Lip Tars.  It’s nice and compact and squeezes out easily.  It functions just fine but I sorta wish it was in a package with a wand similar to the YSL Glossy Stain.  I think it might be easier and neater to apply that way.  Especially for touch-ups on the go.
The color: Neon.  Neon.  Neon.  It’s a super bright pink that seems to have a tinge of a blue base when swatched, but also manages to lean orange….?  I didn’t think that was possible but thats how it looks to me. 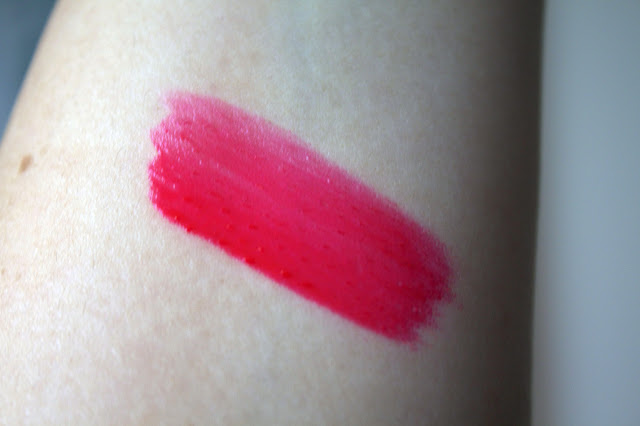 If you look at the arm swatch it looks blue based at the edges where it is applied thinner, but where it is more heavily built up, it has an orangey glow.  A curious color for sure, but it’s really beautiful, I think. 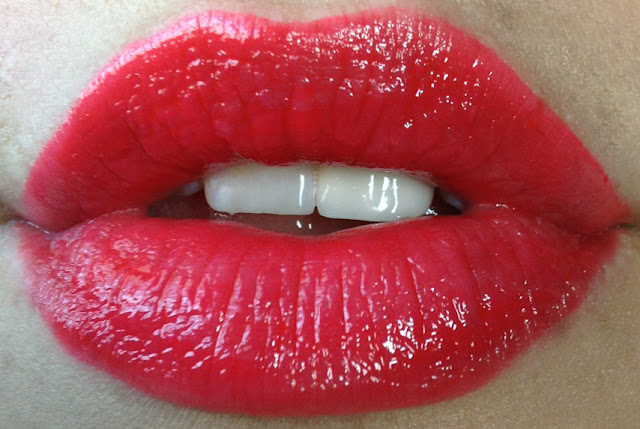 As you can see, on the lips it looks much more like an orangey neon pink.
The Formula: The formula is different than the original OCC Lip Tars.  It is more translucent obviously, and it isn’t as concentrated so you need to apply more product than you do with the originals.
But it is concentrated considering the glossy finish and it still doesn’t require a ton of product so one tube should still last quite a while.
It feels comfortable on the lips, not at all sticky, and pretty light too so you don’t feel like you have a ton of product smothering your lips.
It doesn’t feel drying while you have it on, but I did notice that my lips felt fairly dry after having it on all day and removing it.  So it probably is a little drying, but you don’t notice due to the slick formula.  Nothing crazy though.
As for wear time, contrary to some other reviews I have seen I found that it wore off FAR faster than the original Lip Tars.  I got about 2 hours out of it before I needed to touch it up where I often get 4-5 hours out of Lip Tar.
That doesn’t really bother me though because I don’t mind touching up a few times throughout the day.  I never get why people need a lip product to last for like 14 hours or whatever, I sorta enjoy touch-ups.
It definitely wears for a long time for something that looks as glossy as it does.  We all know how lipgloss likes to do a disappearing act, so this is a major improvement over that, fa sho.
Overview: I like it a lot.  It’s a gorgeous color, and I feel comfortable wearing it and for something glossy and shiny it stays on for quite a while.  It definitely gives the stained glass type effect that OCC described, and I think it’s a very interesting addition to my little collection of lip colors.  I will definitely check out more of the color range.
Oh! and if you want to see the product in action, check out my recent makeup tutorial where I used it!

How to stop your hairstyle from falling flat!

After hearing people sing its praises for the longest time, I went into Sephora last week and picked up the Illamasqua...
Copyright 2014 MsQuinnFace. All Rights Reserved. Sitemap Designed By: Ryan Lamothe
Back to top