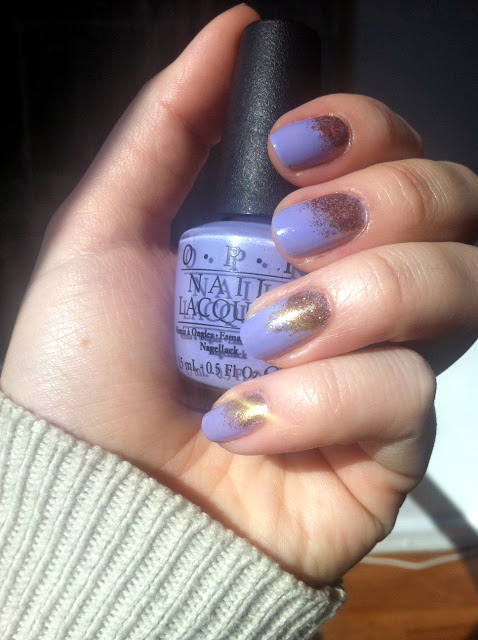 Hey everyone!  Just wanted to pop in and say hello with a little Nail Of The Day!
This last week and a half I’ve been obsessed with layering  OPI “Goldeneye” Over OPI “You’re Such a Budapest” in sort of a reverse ombre pattern.  By obsessed I mean every time it chips I redo it the same way, which is a BIG DEAL because I almost never wear the same nail color/design twice in a row.
If you want to recreate this look its really simple.
Two coats of You’re Such a Budapest, then paint one thin layer of goldeneye about halfway down the nail starting from the cuticle.  Then another thin layer of Goldeneye over that, again starting from the cuticle but this time only going about 1/4 of the way down the nail (that’s what gives it a gradient effect)
The look is much more striking in person….and it really reminds me of something but I can’t put my finger on what it is.  If anyone figures it out, let me know in the comments because it’s driving me batty!If you want to recreate this look yourself you can find these colors here:
OPI “Goldeneye”
OPI “You’re Such a Budapest”

Hope everyone’s having a great week so far!

Hi everyone! So this weeks tutorial is a rose gold look.  I originally did the eye look during my "12 days of holiday...
Copyright 2014 MsQuinnFace. All Rights Reserved. Sitemap Designed By: Ryan Lamothe
Back to top