Nail Strips: I Tested A Bunch So You Don’t Have To! 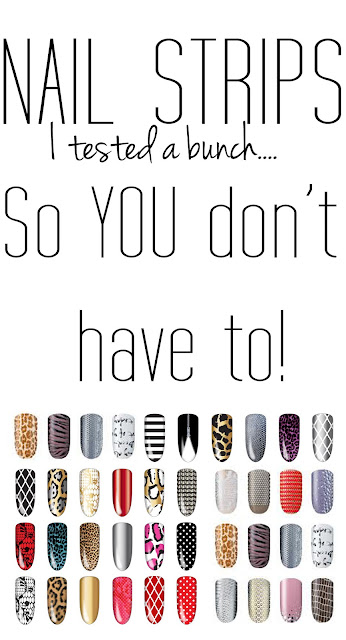 Nail strips…such a great invention.  Crazy nail art in an instant? No dry time? C’moooonnnnnn you cant beat that.
But not all nail strips were created equal.
I have been using nail strips pretty much since they hit the market but I have my brands that I am loyal and I tend to stick with those (heehee nail pun) so I didn’t really feel like I had a good handle on the quality of each of the major brands.
The last few weeks I have dedicated my hands to testing four of the heavy hitters in the nail strip game.  After testing a few new comers, and even re-testing some older brands that never worked for me (as well as old favorites that totally do), I think I have a pretty good overview of the whole thing.
So let’s start in familiar territory. 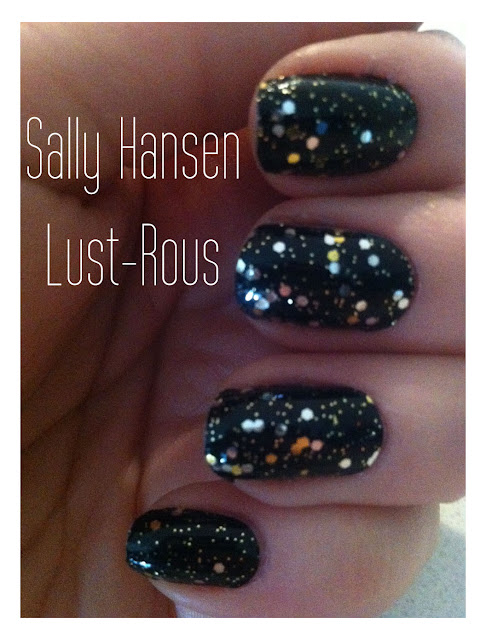 Sally Hansen Salon Effects: Lust-rous
The Sally Hansen Salon Effects Strips are probably the most well known ones on the market, because they have been around for a while and you can find them in pretty much any drugstore/walmart/target etc.  I figured we would talk about these first because that’s what we will all be comparing everything else to anyway…I know I was.
These are what got me hooked on the nail art strip concept.  They are easy to apply and they wear very well.  I usually get about 5-6 days out of them, which is far less than they claim (they claim up to 10 days wear)  but like I have mentioned before, my nails reject polish like no other.  A regular manicure lasts 3 days tops, so 6 is miraculous. 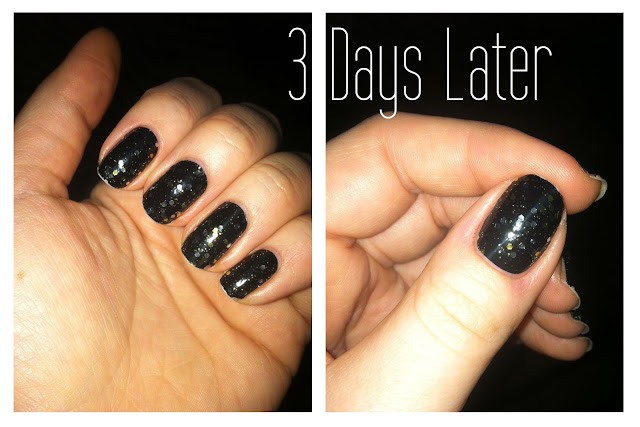 This is how they looked 3 days in.  They had some minor tip wear, and could probably have used some top coat to give them more shine, but I didn’t want to mess with the experiment by adding variables (such a geek, I know shut up lol)  And this is how they stayed until day 6 when the tip wear became chips and I felt the need to remove it.
In short I love these.  The one downside is that I feel like a lot of the designs are very juvenile looking.  There are some which are really cool like this one, but many are really childish looking in MY opinion. I’m pretty picky though so that may not bother other people.
Moving on.  When I saw the new Essie strips I about blew a gasket.  The designs were SO COOL.  Really “me”, and Essie makes such high quality products so I was really excited to try them.  I went to Wallgreens and picked up these bad boys. 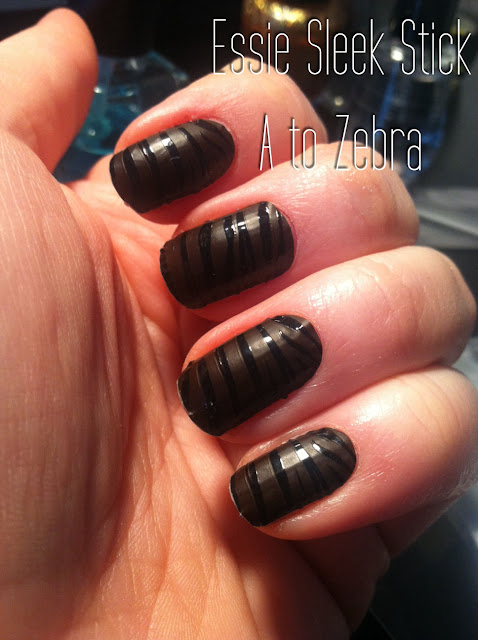 Essie Sleek Stick: A to Zebra
Matte brown polish with gloss black zebra?  It’s like they took me and transformed me from a human into a nail strip!
They retail for $10.25, which is a few cents over the average price for nail strips.  I heard some people saying they were $15.00, but they are $10.25 on drugstore.com so if your local store is jacking up the price, look online.
I wanted to like these SO BAD, but as I applied them I already felt the disappointment setting in.  They were thick and plastic-y UGH…. but not as thick as some others I have tried so maybe there was hope.
I also noticed that the sizing of the strips was a bit weird, like one size would be too big for a nail but the next size down was way too small…which made it much harder to apply them well.  After some fiddling I got them all on, and they looked great, save for a few bubbles around the edges…. 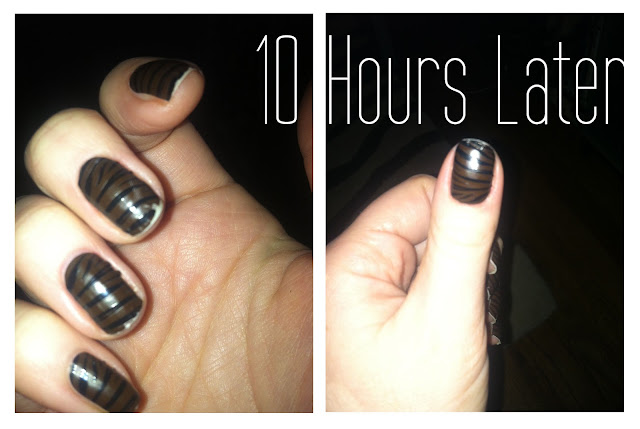 10 hours in, and the edges where the minor bubbling had occurred were wearing down and showing both the whiteness of the base the strip is printed on (essie says they are gel polish, pre-cured under UV light, but in all honesty it really seems like plastic) as well as parts of my nail showing through.
I was sad inside but I kept them on hoping that this would be the extent of the damage, but it wasn’t…. 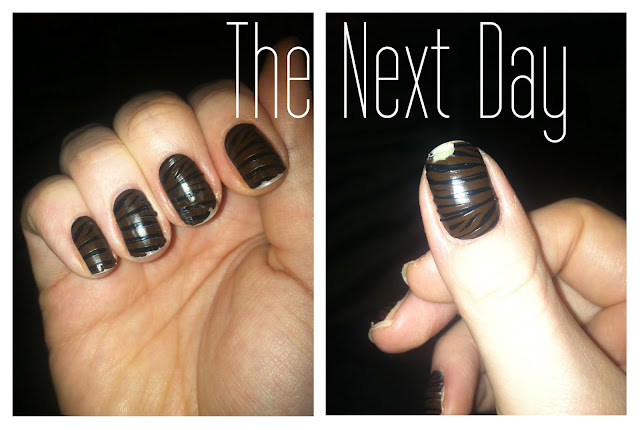 The next day by the time I showered this is what they looked like.  Strait up skanky.  Sleek, perfect brown zebra is totally chic, chipped up nasty zebra is Trash City, USA.
So off they came.  Luckily they peel right off so at least they are easy to remove.  I was SO determined to like these because of the designs, that I went out and got TWO more packs to try.  I got another of A- Zebra in case I had just applied them badly.
ON my second go around with A to Zebra  they performed pretty much exactly the same, I didn’t even bother to take pictures because it seemed so repetitive.
But I also got these… 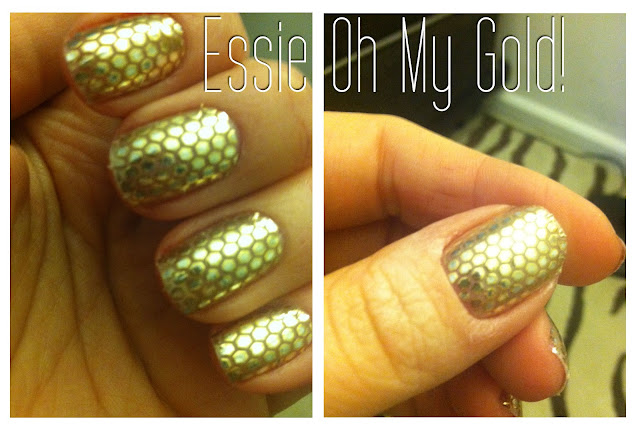 I love this design too, isn’t it awesome?!

They applied a little better than the zebra ones, and I really started to feel hopeful.  The lighter design and the clear base it was one seemed like it would be more forgiving around the edges if it chipped too. 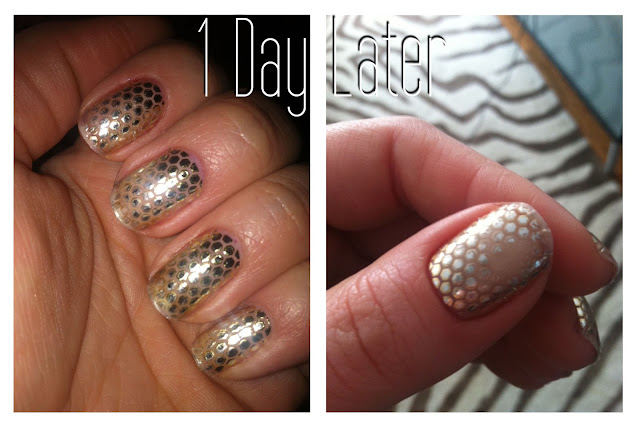 24 hours later, this is how they looked.  The design literally wore right off the base…what in the WHAT??  By later that night most of the nails looked like my thumb, so off they came.

Overall, these designs are so cool…why cant they just work better?  It hurts my soul.

These do have some redeeming qualities though.  If you are jonesing for these designs like I am, I recommend sticking to the metallic ones with the clear base, and using it only as an accent nail.  The pinky and ring fingers wore off the least, and if you put them over dry polish, you can peel them off when they wear down without ruining your manicure.  And these don’t dry out like the Sally Hansen ones do, so you can use one as an accent and save the rest for later! 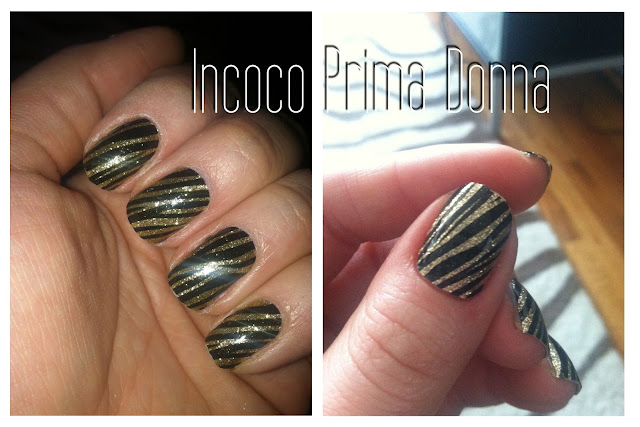 I feel like not too many people know about Incoco.  I have never seen them in stores, but I know there are some salons that carry them and will apply them for you.

I usually order mine from their website.  The prices vary from about $7.99-$9.99 but the shipping is really reasonable, so the price works out to about the same as most strips you can find in stores.

Performance wise, these are about the same as the Sally Hansen Salon Effects.  The quality even seems a tiny bit better in that they are a little more flexible, which makes them easier to apply.  The variety of designs is also a little bigger which I like a lot.

I have ordered this design “Prima Donna” probably about five times now, because it’s really bad-ass, but they also have a ton of more subtle ones and even just plain glitters, as well as some really crazy prints. 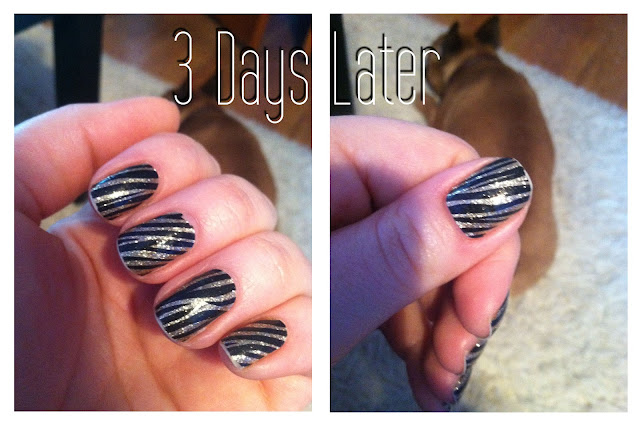 After three days the tip wear was really minimal.  There was one chip at the cuticle on my middle finger, but that may have been my fault for not wiping my cuticle oil off properly.  It has never happened before when using these.

On the sixth day they were chipping enough for me to take them off, which is typical for me with these strips.

Overall these are something I keep coming back to for a reason. Quinnface approved.

And last we have Nail Rock.

Much like the Essie Sleek Sticks,  I want to like Nail Rock because they have so many cool designs.

In the past I have tried the Chrome Gold ones, the ones that look like Dalmatian print, the “Fuzzy” Leopard ones…and probably more that I don’t recall.

None of them worked.  Like I couldn’t even get them ONTO my nails.  And as you can see, I am no amateur at applying nail strips.  This was back in the day when you had to use a blow dryer to warm them up when applying them.  I heard that they changed the formula and they could now be applied like most other nail strips though, so I figured I would give them another try. 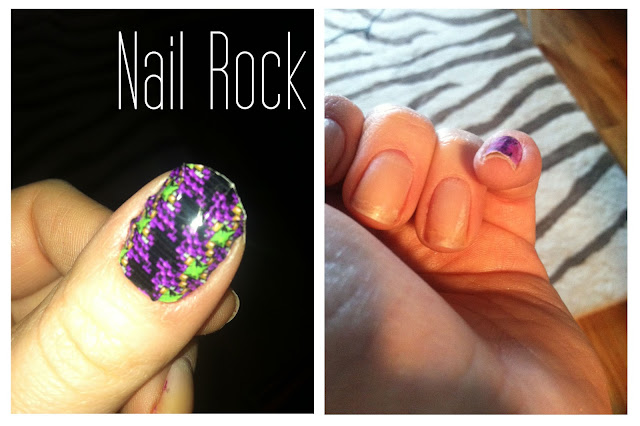 Nope.  Just..no.  They barely stick, I just don’t understand.  They’re too thick and hard to file off evenly, and when you do file them the edges wear off and you can see the white underneath.  Am I missing something?   I literally have never gotten an entire set onto my hands.

I must have read the directions 87 times to make sure I wasn’t missing something.

I can’t tell you about the wear time because quite frankly I didn’t actually get to wear them.

If someone out there can give me advice on how to make these work better, please tell me.  Because the designs are hot, and I want them to work DAMMIT!  Whew, OK deep breath.  It’s just nails…

There are more brands out there, but my nails need a break.  Maybe a part two in a few months?  We’ll see.

If you are looking for the ones I like:

and you can find Incoco on their website: Incoco.com

(I am not associated with any of these brands.  Links through amazon are affiliate links)

Spring Into Warm Weather with Bold Lips! Inspiration and Swatches!

Great blog/website. I like honest reviews. I’m curious if you have tried the Opi nail strips yet or jamberry? I put an Opi set of nail strips on that I picked up from sephora and they are amazing. Some pretty cool designs too. I’m going on to day 7 and the only reason I may have to change them is due to nail growth. Jamberry I got maybe 4 days out of, but they have some cool designs.

I tried the OPI ones from Sephora really recently actually, and I was really impressed! The designs ARE really cool, and they last as well as the Sally Hansen and Incoco strips. so I’ll definitely be checking out some more of those. I haven’t tried Jamberry, I think I’ve seen people selling them on facebook (Sorta like an Avon type of thing I guess?) but I haven’t tried any yet. I’ll take a look at the designs though, thanks 😀

[…] sick of them.  I’m a fickle creature. Back when I was using them pretty much all the time, I swore by Incoco nail strips.  They are the easiest to apply (even better than Sally Hansen I think) and […]

Spring Into Warm Weather with Bold Lips! Inspiration and Swatches!

So, as of right now It's still cold here on the East Coast, but I'm already getting excited for the warmer weather.  It's...
Copyright 2014 MsQuinnFace. All Rights Reserved. Sitemap Designed By: Ryan Lamothe
Back to top