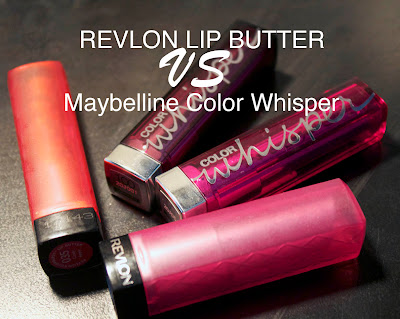 So, Maybelline recently came out with a product called Color Whispers, which is basically their answer to Revlon’s Lip Butters.  As soon as I heard of them I knew I wanted to compare the two.
I do like the Lip Butters, but they were not what I was hoping they would be. I was hoping for a tinted lip balm that added a sheer, but punchy color to the lip.  They turned out to be more like a hydrating lipstick, which is nice, but not what I had gotten my hopes up for.
There are a bunch of things like what I was looking for on the market, from drugstore to high end, but I’m always on the lookout for more options. I also like knowing which drugstore items perform best, because that way if I ever need to grab something in a pinch I don’t end up with a flop!
Color Whispers are exactly what I was hoping Revlon Lip Butters would be!  They are sheer, but noticeable color.  They are fairly hydrating and easy to apply.  Essentially what I wanted was something to add color, that was not a gloss, but I could pop it on my lips real quick without worrying too much about being neat.  You know, slap it on while running for the train and be on my way with nice pink lips! 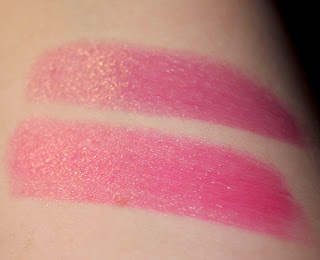 Top: A Plum Prospect
Bottom: Cherry on Top
I chose a pink color and a plum color, and so far I like them both.  As you can see they are pretty sheer, but still bright. 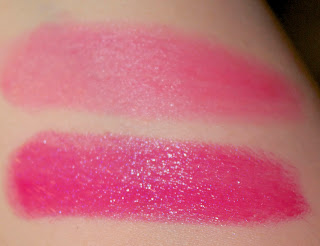 Top: Maybelline Color Whisper “Cherry On Top”
Bottom: Revlon Lip Butter “Lollipop”
Here are the two pinks that I own from each line, side by side.  As you can see the Revlon Lip Butter is far more opaque and pigmented.  It’s a really incredible color, and I have gotten a ton of use out of it, but I use it more like a lipstick, I neatly apply it in the mirror before I leave, and fix it carefully in the bathroom while out.  The Color Whisper is something I would keep in the pocket of my purse to pop on when my face needs a little pick-me-up on the go. 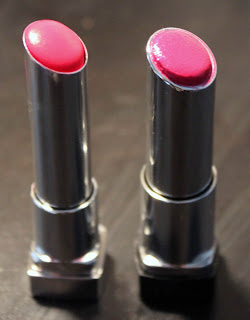 Left: Maybelline Color Whisper “Cherry On Top”
Right: Revlon Lip Butter “Lollipop”
As far as the packaging, they are similar.  Roll up tube, slanted top, and a cap that corresponds to the color inside.  Personally I prefer the cap on the Color Whispers, just because I like the design better (You can refer to the photo at the top of the post to see the design) Functionally they are pretty much the same.
So whats my final answer? They are different.  They are marketed as the same type of product but in my eyes, they aren’t.
In the end I will still use and probably buy more of the Revlon Lip Butters, but I’m also glad that Color Whispers are available, because they fill a different niche in my makeup needs.
<3

OCC Lip Tar is one of my favorite products EVER.  It wears for hours, you only need a tiny bit to get full coverage, it's...
Copyright 2014 MsQuinnFace. All Rights Reserved. Sitemap Designed By: Ryan Lamothe
Back to top