A while back I ordered a bunch of nail striping tape on amazon.  I was so excited to get them, but they took forever to show up. ( I guess I should have figured that might be the case when it was $1.63 with free shipping duh)

They took so long in fact that I forgot I ordered them at all! So yesterday when they finally showed up it was like a surprise.  Wee Free Presents!…Kinda
For some reason I was drawn first to the silver, and apparently I was also feeling really monochromatic because this is what I came up with… Ooo Shiny
What’s awesome about this, is that it has a lot going on so people assume you did a lot of work, but really it took me about 4 minutes longer than a standard manicure.  Shhhhh, don’t tell anyone.
I started with a coat of Essie 3 Way Glaze as a base 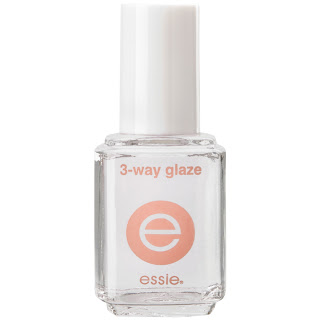 I like this base coat because it seems to cut down on chipping.  I have the type of nails that chip in 12 hours, so this is important for me.
Then I painted all of my nails in two coats of Revlon Nail Enamel in “Carbonite”  which I picked up at CVS because I heard it was a close dupe for Chanel “Graphite”….And also because I’m a dork and it reminded me of Han Solo but that’s neither here nor there….

The verdict is, it’s pretty close to the Chanel version, but it doesn’t have quite that same eye-grabbing sparkle.  Still nice though.
Then I took my silver striping tape gently placed a strip of it across some of my nails and snipped it off the roll with a cuticle scissor.   If the ends stick up a little just gently pat them back down and they should stick for now. 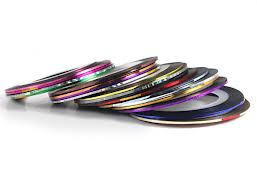 As you can see this stuff is very thin and delicate, it literally lays about as flat on your nail as actual polish.  But it is very important to coat it with a nice thick top coat, or you will start to get peeling at the edges rather quickly.  Which is so annoying because they catch on your hair, which always makes me a little cranky.
After I did a few of them with the tape I thought “This looks nice but let’s mix in some textures!” so I grabbed a bottle of Nails Inc. 3D Glitter polish in “Maida Vale”  and painted it just on the ends, dragging it upward to fade it out.  With a light hand, this is surprisingly easy to do. 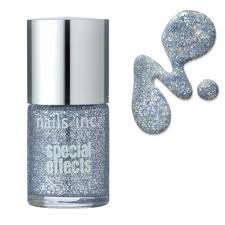 The cool thing about the Nails Inc. 3D glitters is that they dry as if you applied glitter straight to your nails with no polish.  The effect is almost like a sequin skirt or something.
I topped everything off with Seche Vite Dry Fast Top Coat 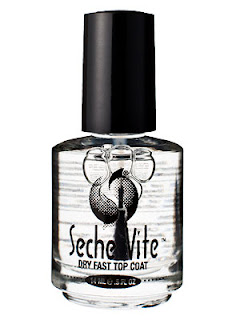 I actually used two coats of this on the nails with the striping tape to be sure that they would stay put.
I like to use this topcoat whenever I’m in even the slightest rush because within seconds the top layer is dry enough that you can touch it lightly and it won’t move.
This is great for folks like me who have no patience and like to do silly things like rearrange furniture or go rock climbing right after they do their nails.  I have actually messed up my nails doing one of those two things right after painting them, I’ll let you figure out which one it was….
And thats the whole look!
Hope you all liked it 🙂

"Prep your Pout" How To Prepare Your Lips for Lipstick

I love these products!! 🙂

Thanks so much, Shari! I really love the striping tapes!
Love your blog by the way =)

"Prep your Pout" How To Prepare Your Lips for Lipstick

A lot of attention is often given to different techniques of applying lipstick.  Of course, applying lipstick properly...
Copyright 2014 MsQuinnFace. All Rights Reserved. Sitemap Designed By: Ryan Lamothe
Back to top