Doing your makeup every day often becomes a pretty robotic routine.  If you reach for the same items and apply them the same way it is easy and quick and you can be confident that you don’t look like a fool…I mean someone would have told you by now right? Right.

But that can be so boring.  Even if it looks good, you don’t feel special and pretty if you look the same as you do every day, no?  You don’t wear the same shoes every day, why is it ok to wear the same makeup ever day?  The answer is “It’s not ok!” Shake it up a little bit.  It’s for your own good.
I always try to find little ways to spice up my daily routine.  I especially like things I can add on as a transition from day to night.
This little trick fits both of those criteria.  It is highlighting in GOLD.  Most of us already add a touch of a highlight color on our tear duct and under our brow in some sort of reflective, pale color.  So how much more effort would it be to replace this pale color with a nice metallic cream?
Recently after much himming and hawing and drooling over it, I finally picked up Illamasqua Liquid metal in the color Solstice.  It is a creamy pigment with a very metallic gold finish.  After playing with it for a while I decided to use it as a highlighter on the very simple natural eye and red lip I was wearing, and OMG I loved it. 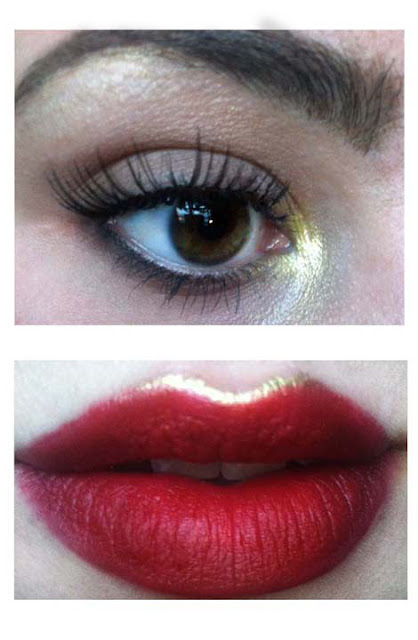 Seriously, how pretty is that? It’s like morning sunlight bouncing off a Unicorn.
And it took me literally 30 seconds to add it to the makeup I already had on.  You have 30 seconds to make yourself feel just a teeny bit more glam, you deserve it…I think.  Then again you could be a murderer, what do I know?  Murderers need not apply.
The only thing about the liquid metals is that they don’t set, so you may want to set it with a similar gold powder on the eyes if you want the look to last.  I would recommend a pigment like Sugarpill’s Goldilux or Mac Reflects in Antique Gold (That is a touch darker though).
There are also a few other cream products that will give you a similar effect to the Liquid Metal, such as the Gold in the Make Up Forever Flash Palette, or Make Up Forever Aqua Cream in #11 (This one does set actually so no need to worry about a pigment)  I find that none of these are as metallic as the Illamasqua Liquid Metals.
For the punchiest most metallic result that will stay on the whole night  I would go for Illamasqua Solstice with Sugarpill Goldilux layered on top.  On the lip it stayed the whole night for me, without anything over it, but you could do the same here.
You can even just use a gold shadow on it’s own for a more subtle look, if that’s your thing.
So if you have been bored and stuck in a makeup rut lately, give it a shot.  It’s so simple and so fast literally everyone has the time and skills to pull it off.
Full list of products I used:
Eyes:
Urban Decay Primer Potion
Urban Decay Naked Eyeshadow (Whole Lid)
Urban Decay Buck Eyeshadow   (Crease and Lower Lash Line)
Urban Decay 24/7 Glide On Eye Pencil Pencil in Zero (Lower Lash Line)
Urban Decay 24/7 Glide On Eye Pencil in Midnight Cowboy (Water Line)
Ardell Whispies Eyelashes
Maybeline The Falsies Waterproof Mascara
Illamasqua Liquid Metal in Solstice (Inner corner and under Brow)
Brows:
Anastasia Brow Whiz in Medium Ash
Mac Brow Set in Beguile
Lips:
Urban Decay 24/7 Lip Liner in Gash
Mac Lipstick in Russian Red
Illamasqua Liquid Metal in Solstice (On Cupids Bow)

How to Get Eyelashes to Stay Curled

How to Get Eyelashes to Stay Curled

How many of you out there have this happen?  You sit down and do your makeup, curl your lashes with a great deal of care...
Copyright 2014 MsQuinnFace. All Rights Reserved. Sitemap Designed By: Ryan Lamothe
Back to top