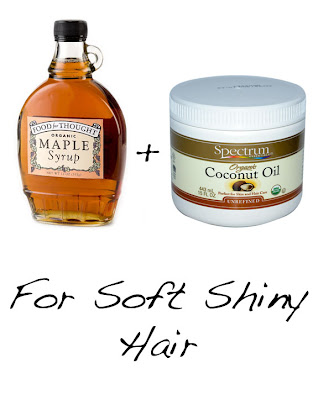 You never know what you will come up with when you combine poking around on the internet and playing around with the things in your kitchen.

I have been using unrefined virgin coconut oil as a mask in my hair for a few years now, and I swear by it.  It’s so moisturizing.  It also smells amazing, like seriously so good you will have a hard time not eating it.

One day while creeping around on the internet I read that maple syrup is also good for your hair.  I had a really hard time imagining myself pouring syrup on my head like some sort of human-waffle hybrid who is somehow vain enough to put a treatment on it’s hair.  So I decided I needed to mix it with something and make it more of a mask.  In a moment of genius as if the stars were aligning (whatever that means) I had the brilliant idea to mix it in with my coconut oil.  I’m sure someone else out there has already done this, but who knows I may have invented it.  I certainly never heard it anywhere else before.

When I mixed the syrup with the oil, which was room temperature and therefore a strange, halfway between solid and liquid consistency, it made a goopy, jelly-ish concoction and it smelled GLORIOUS!  I eagerly slathered it all over my hair, tied it up and read a book for a while.

The nice thing was that it sort of dried to a bendable plastic texture that was easy to get out of the ponytail but also didn’t mush itself all over the couch as I was reading.  And it smelled like an oatmeal raisin cookie, which is weird because it has neither oatmeal nor raisins in it.  The downside was that my dog kept trying to eat my head.

After about an hour I washed and dried my hair normally and it was so soft and shiny! Am I a genius?!?  Well it just took me about three tries to spell the word genius so I’m guessing probably not, but I made a nice mask thats for sure.

Here is my exact recipe: 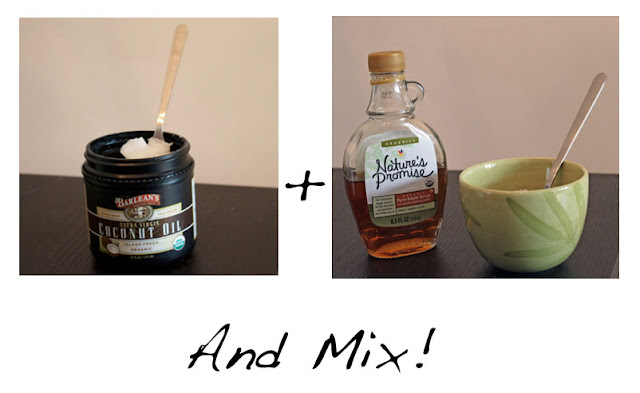 Mix equal parts Virgin Unrefined Coconut Oil and Maple Syrup. Both items I used in my example are USDA organic, but you don’t need to go out of your way to get organic items, this just happens to be what I had on hand.  However, you do need to get real maple syrup, not maple “FLAVORED” syrup like Aunt Jemima or Mrs. Butterworth.  If the bottle is shaped like an old time-y fat lady you most likely have the wrong thing.

It might take some vigorous mixing to get it smooth, but try your best to get the lumps out.

(Side Note:  Coconut oil is a funny substance, the temperature difference between having it fully solid and fully liquid is like .000000001º.  Obviously I’m speaking in hyperbole but, somewhere in the middle is best for this mask because too cold will make it hard to scoop out and mix, but too warm will make it messy to apply, room temperature should be just about right.)

Make enough that you can cover your whole head in it pretty liberally.  Get a good coat on there.  Don’t be shy, get in there with it. Obviously more hair means more mask, but you could always mix some more if you need it.

Now just slather it on, live your life for an hour and wash and style your hair as usual.

I like to do this once every few weeks, or whenever I feel like my hair needs some extra help.  It usually brings my hair from a B right back to an A+

What's in my makeup bag. Must have products for every day.

Wow i start laughing in the first time i read this.. :p (I am a sanguinis, oh is it really matters? LOL)

And then i wanna do this ASAP!

But i wanna ask u a question..
If i change the ‘Virgin Unrefined Coconut Oil’ with ‘Oil of Coconut Oil – on a bottle’, is it good or only make things worse?

Thank u so much for your help 🙂

Hmmm I’ve never seen Oil Of Coconut in a bottle, but I have tried it with a “refined” coconut oil, and it worked very well, it just doesn’t smell as good. I think it should be fine, if you want to try it!

Many natural oils work well in the hair, so even if it’s different, it should still give you a lot of moisture!

The only coconut oil my local grocery store had was 100% pure LouAna coconut oil is that okay to use? I’ve heard a lot of good things about using coconut oil on hair and I just want to make sure its the right kind to use. Thanks!

Yep! as long as it’s pure coconut oil it should work great. I just looked up that specific kind, and it looks fine to me 🙂

Great thanks so much, can’t wait to try this out!

You are SO Funny!!! You should be a novelist!

Oh man, I’m glad you enjoyed it! I don’t think I’m creative enough for a whole novel but that’s an awesome compliment, thank you!

I’m excited to try this! I have naturally curly hair so my hair tends to dry out easily. Is it difficult to wash out the syrup & oil? And do you wash your hair first, then apply the mask to clean, damp hair?
– Brett

Hey Brett, I have done this on both freshly washed (but dry) hair and dirty hair and both have worked just fine. So whatever is more convenient for you at the moment I guess!

I have never tried it on damp hair, but I can’t see it being too much of a problem, it might just make the process a bit messier if it drips or something?

As far as washing it out, it isn’t difficult but if you are worried about it looking greasy it might be a good idea to shampoo twice 🙂

Awesome! Dry hair it is 🙂 Thanks a lot, I’ll let you guys know how it goes!

Does this work on a black girl’s permed hair? Would love to try this.

Well, I’m no expert on perms, but I can’t really think of a reason why not. It’s usually a good idea to make sure that chemically treat hair of any kinda (permed, dyed etc) are well moisturized, so I think it should be beneficial. The coconut oil will definitely be good for it, but maybe ask your hairdresser if you’re worried about the maple, I honestly doubt that it would have a negative effect on the perm, but it’s always good to check!

[…] no I’m not!  Coconut Oil is the base for many awesome DIY hair masks.  I still use my DIY Maple Coconut Mask and love it, and you can even use just plain old straight coconut oil as a deep conditioning mask! […]

Ok, first I would just like to say that this looks awesome and I can’t wait to try it!!

But before I try it, I could use an answer to my question: when I wash this out, do I use conditioner or not?

That’s an excellent question! I washed my hair and conditioned it as normal, but I think it might depend on your hair. If you find that your hair is usually oily and/or weighed down easily then you could try skipping the conditioner, or maybe using the conditioner only on your ends. I would say the best thing to do is wash your hair after the mask and then decide if it feels like it needs conditioner or not. You know how you can just tell by how it feels after you shampoo? Play it by ear, and use your judgement.

But yeah, my routine is to use conditioner after the mask 🙂

[…] is clarified and towel dried, now it’s time to do a deep conditioning mask.  You can use a DIY mask or whatever store bought mask you prefer.  This time around I used this Eva NYC mask, because […]

Doing your makeup every day often becomes a pretty robotic routine.  If you reach for the same items and apply them the same...
Copyright 2014 MsQuinnFace. All Rights Reserved. Sitemap Designed By: Ryan Lamothe
Back to top